The 1995 film Hackers is probably my favourite film. It is so much fun: I love the outrageous fashion, the rollerblading, the unabashed cheesiness. It represents a more hopeful time I wish to embody. This write up of it says all I could hope to, and says it better. 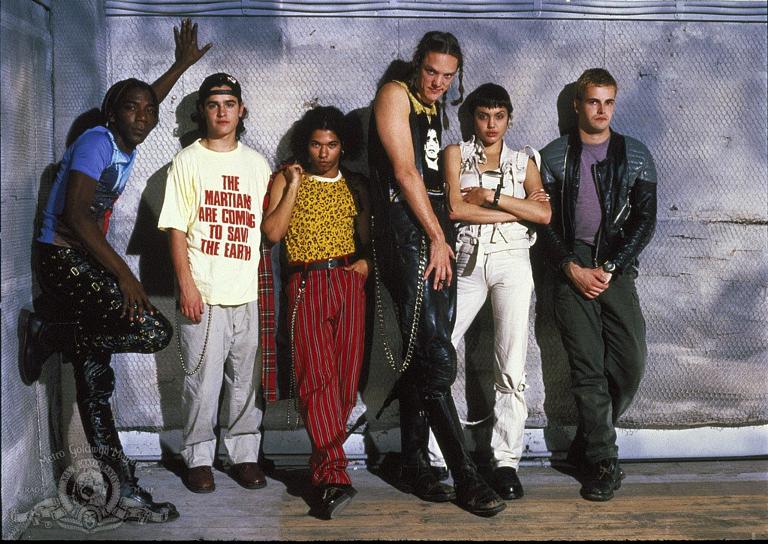 Last month I went to EMF Camp, and there was a showing of Hackers with a competition for best costume. My moment had come: finally an excuse to look like the ridiculous and shiny hacker I desperately want to be.

My first step was to spend a stupid amount of money on PVC from China, which seems to be the only place selling iridescent, translucent PVC I wanted in sizes suitable for making clothes. I wish always to be shiny and opalescent, and would accept nothing less than this surely very comfortable "fabric": 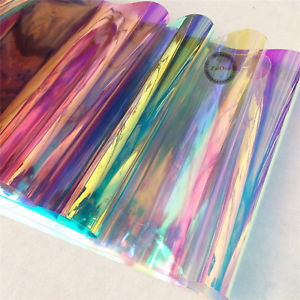 Then I waited for the PVC to arrive which took weeks. Once it arrived, I put off doing anything with it until two weeks before EMF, because I like to suffer. Then, I frantically ordered a sewing pattern, and when it arrived I got to work.

Some aspects of sewing the PVC were easier than using actual fabric, and some were harder. Easier: it's translucent and wipeable, so I could trace the pattern through the PVC with a felt tip pen, rather than having to cut out the pattern and pin it on top. Harder: the PVC I got is less flexible than I would like, and the more pieces I sewed together, the harder it was to fit under my sewing machine.

I should mention now that I am not an experienced seamster and have made exactly one (1) garment before that I made in a beginners' night class. 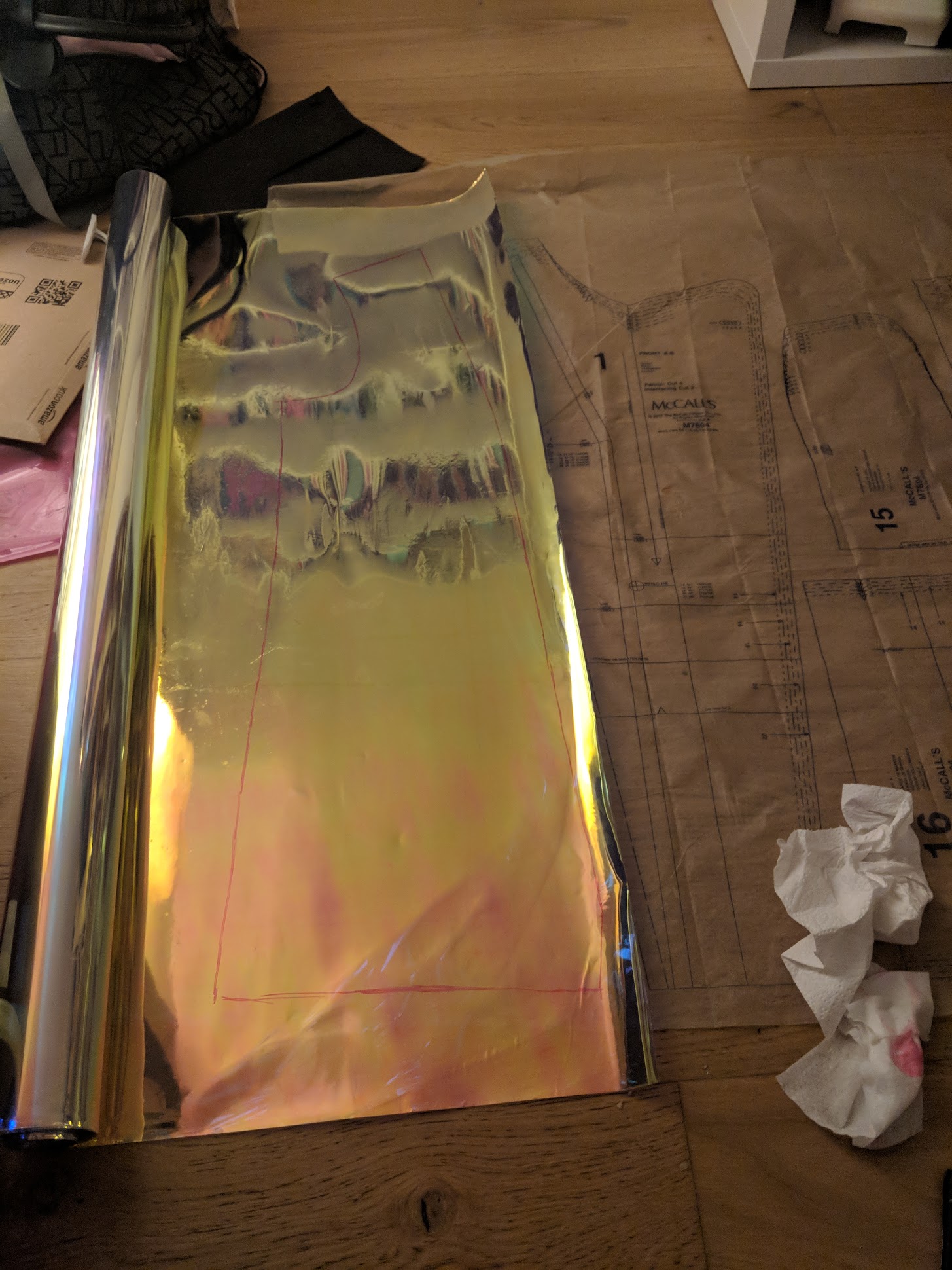 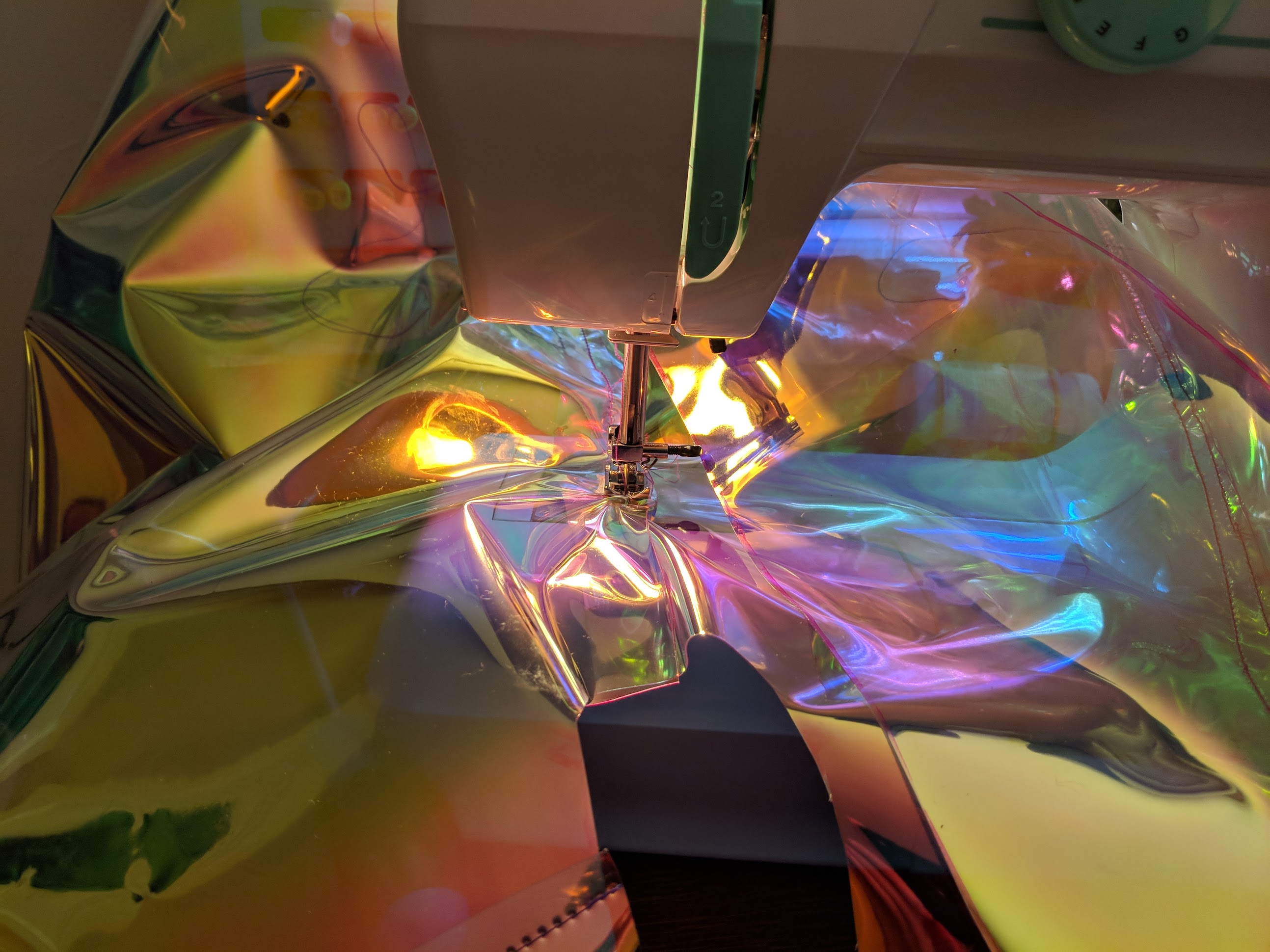 Realising it was all wrong

After five evenings of desperate sewing, I had the terrible realisation that the jacket was too inflexible for its length. I could wear it, but I wouldn't be able to sit down as it wouldn't bend well at the waist. 🙃. It was too late to shorten it – I'd already sewn on the zip and pockets.

Although I was sad to have to scrap what I'd been working on, I was confident I could do a much better and faster job the second time. And I did! I did it in two evenings, somehow. 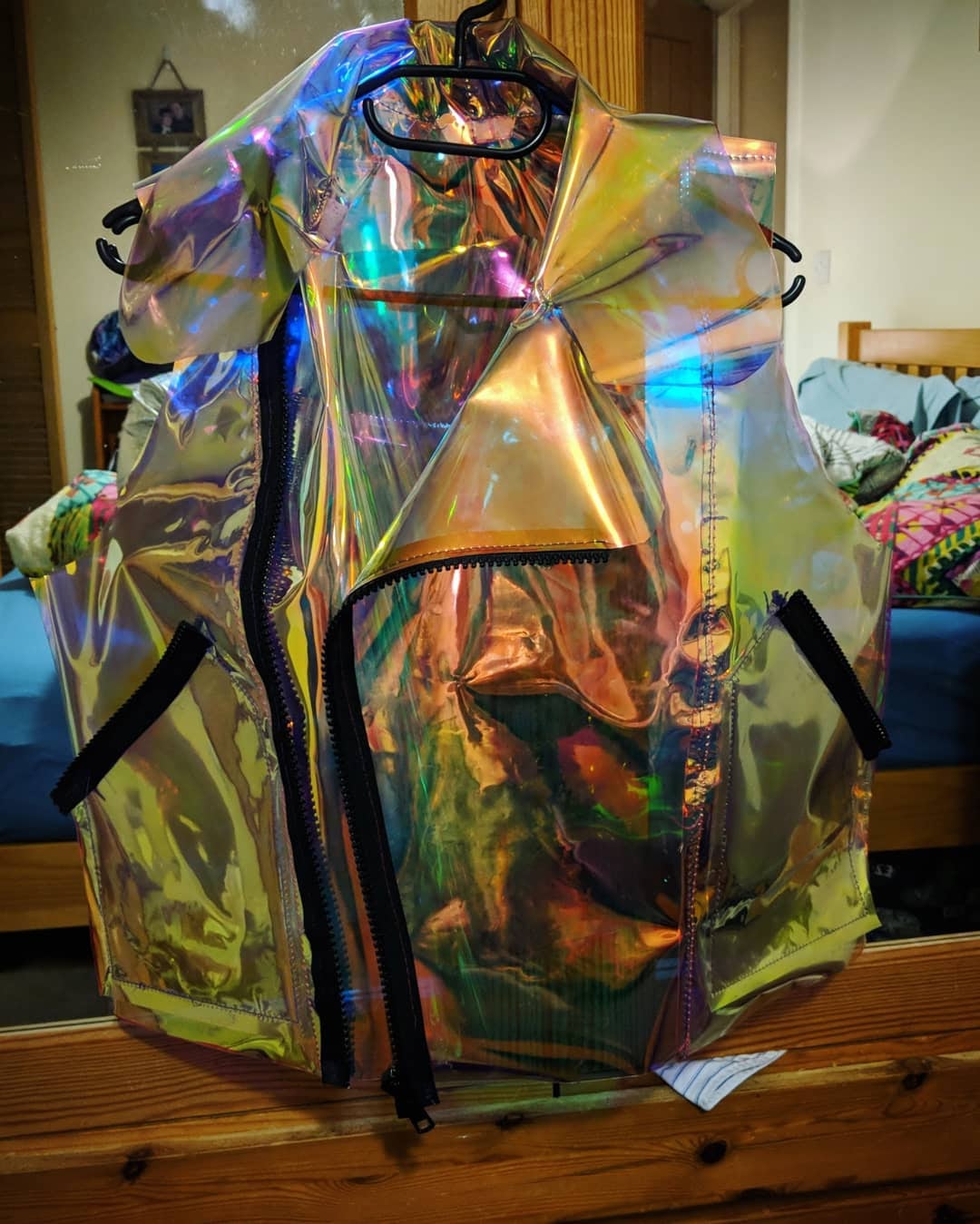 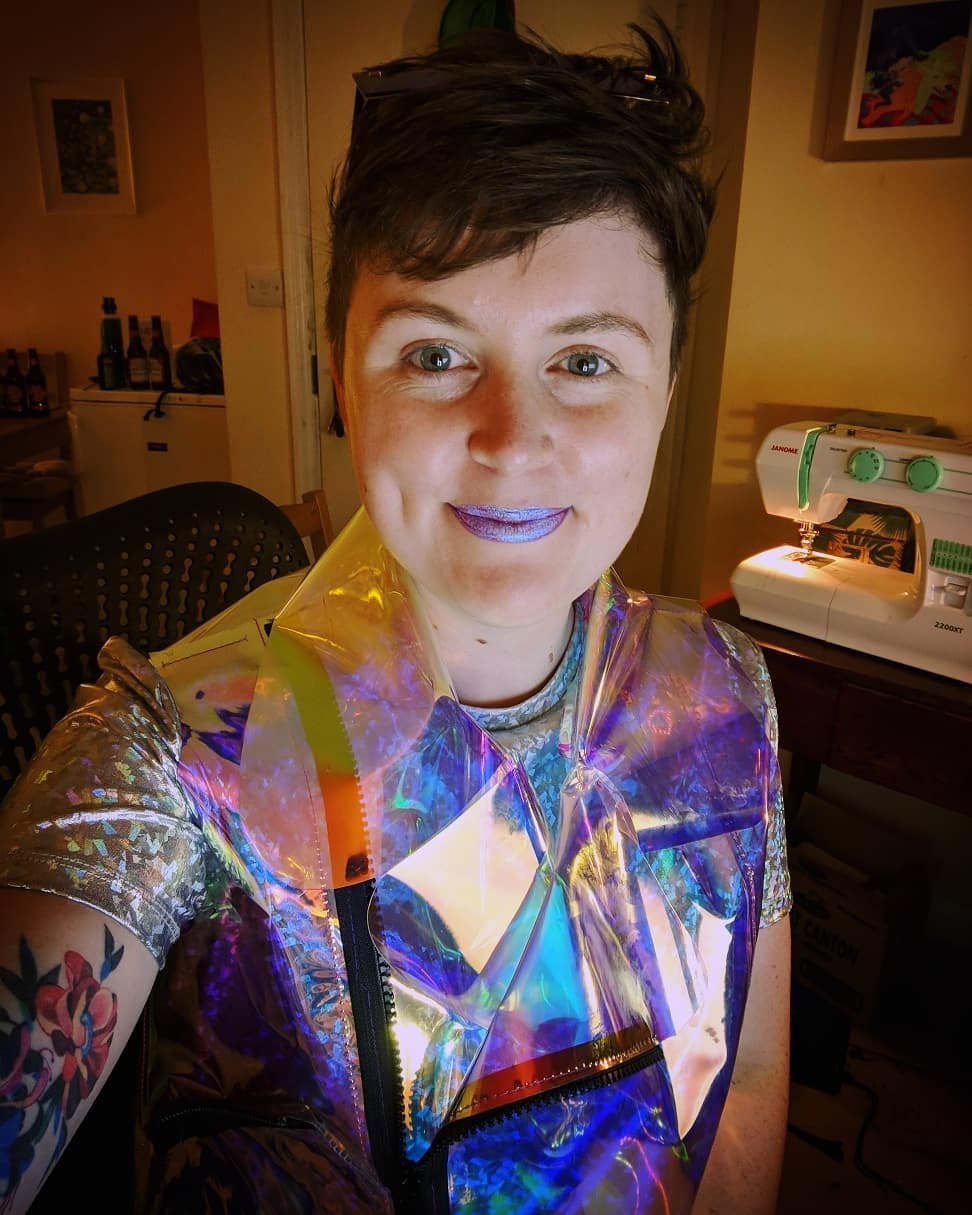 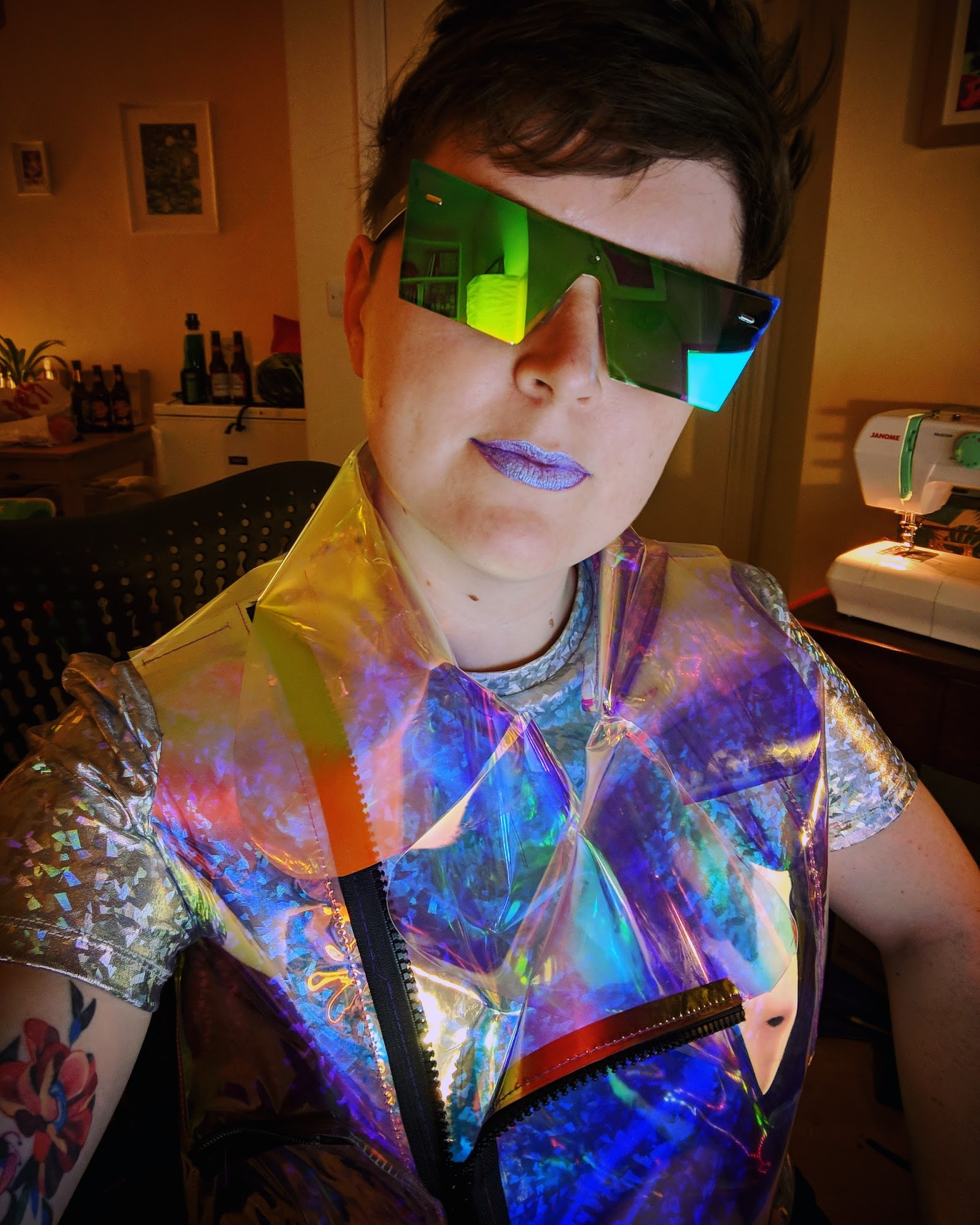 Back when I was a whole 10 months younger and wasn't a hollowed out shell, I still had the mental capacity to do programming outside of my job. I'd been using an STM32 microcontroller at work and wanted to hack about on one at home, both for fun and to help me learn. I got a 1bitsy and some LEDs and made a simple driver for the LEDs with LibOpenCM3. The one pattern I ended up making was a gradient of the bi pride colours. 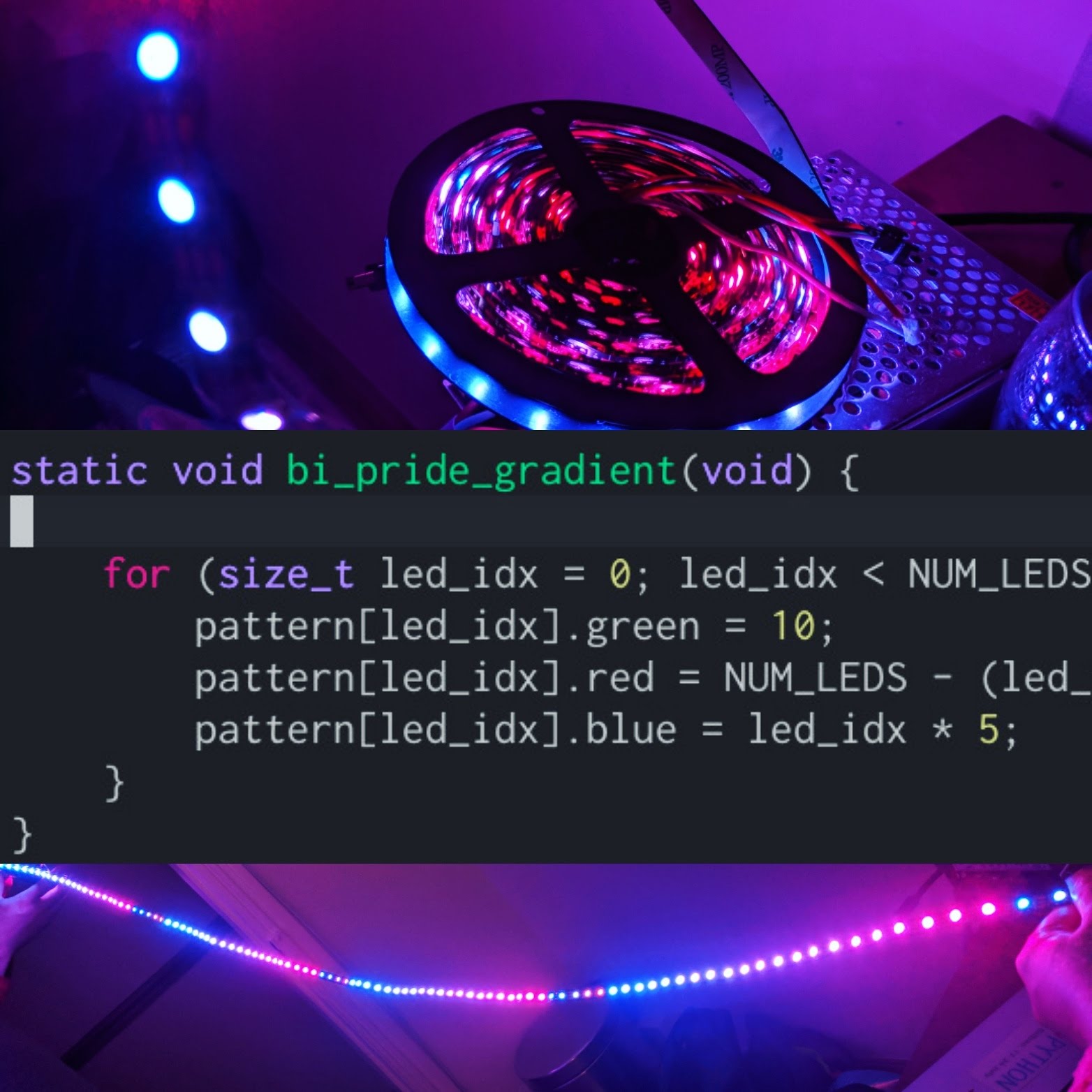 Back to the present day: campsite soldering

The first night at EMF I had to do a bit of campsite soldering (I'm trying to sound cool here, but it was literally a wee bit of wire to a single pin) and then used some tape to attach the LEDs to my jacket collar cos I didn't really have anything else to use and it worked ok. 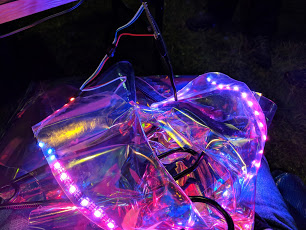 I went to the amazing Null Sector and Cybar and felt pretty cool. The next night was the Hackers viewing and I won the costume competition! I almost didn't enter as I was shy. I won a very fancy bottle of whisky and shook hands with the director of the best film ever made. Here are some photos of me looking the coolest I can probably ever hope to look. 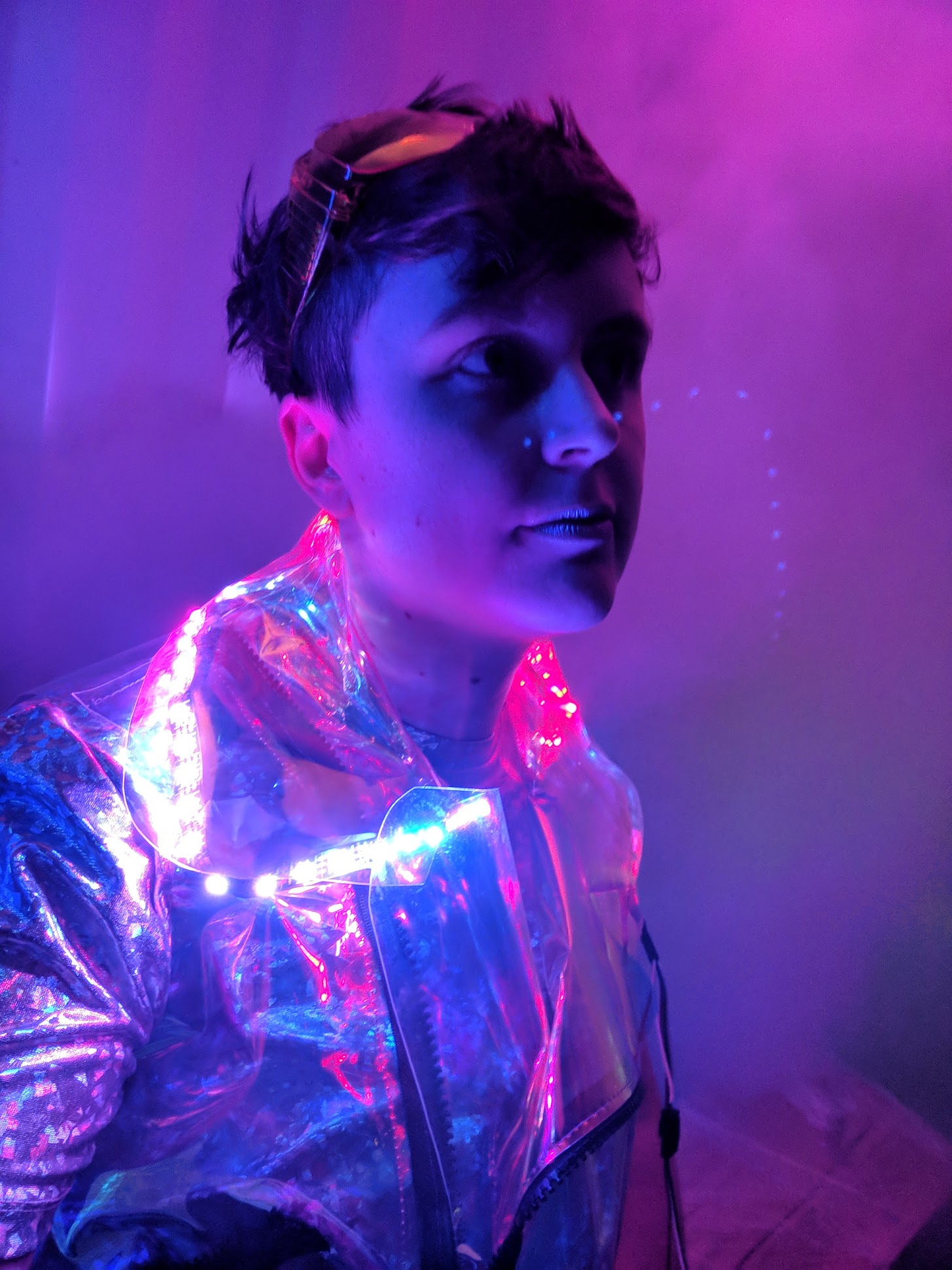 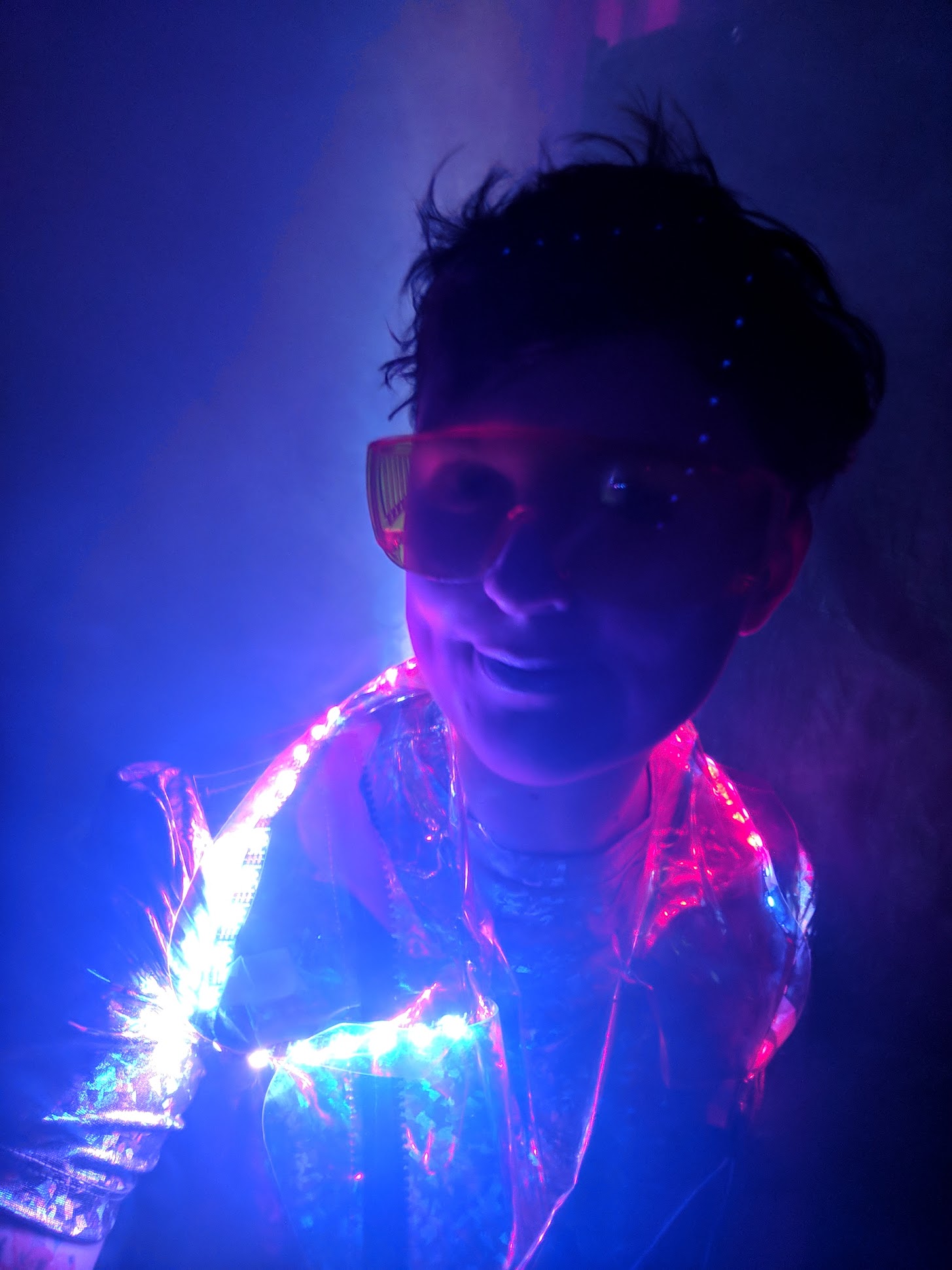 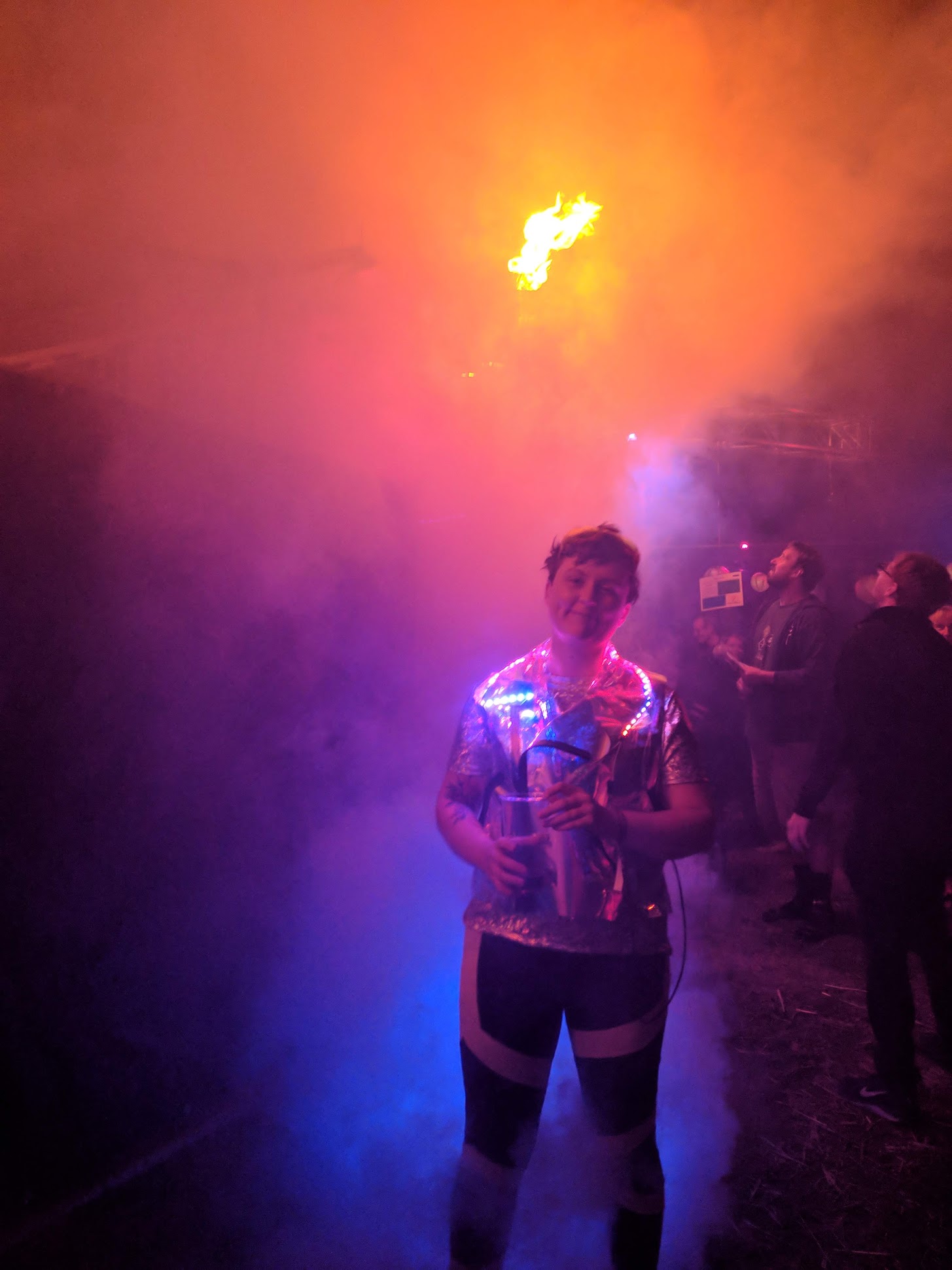 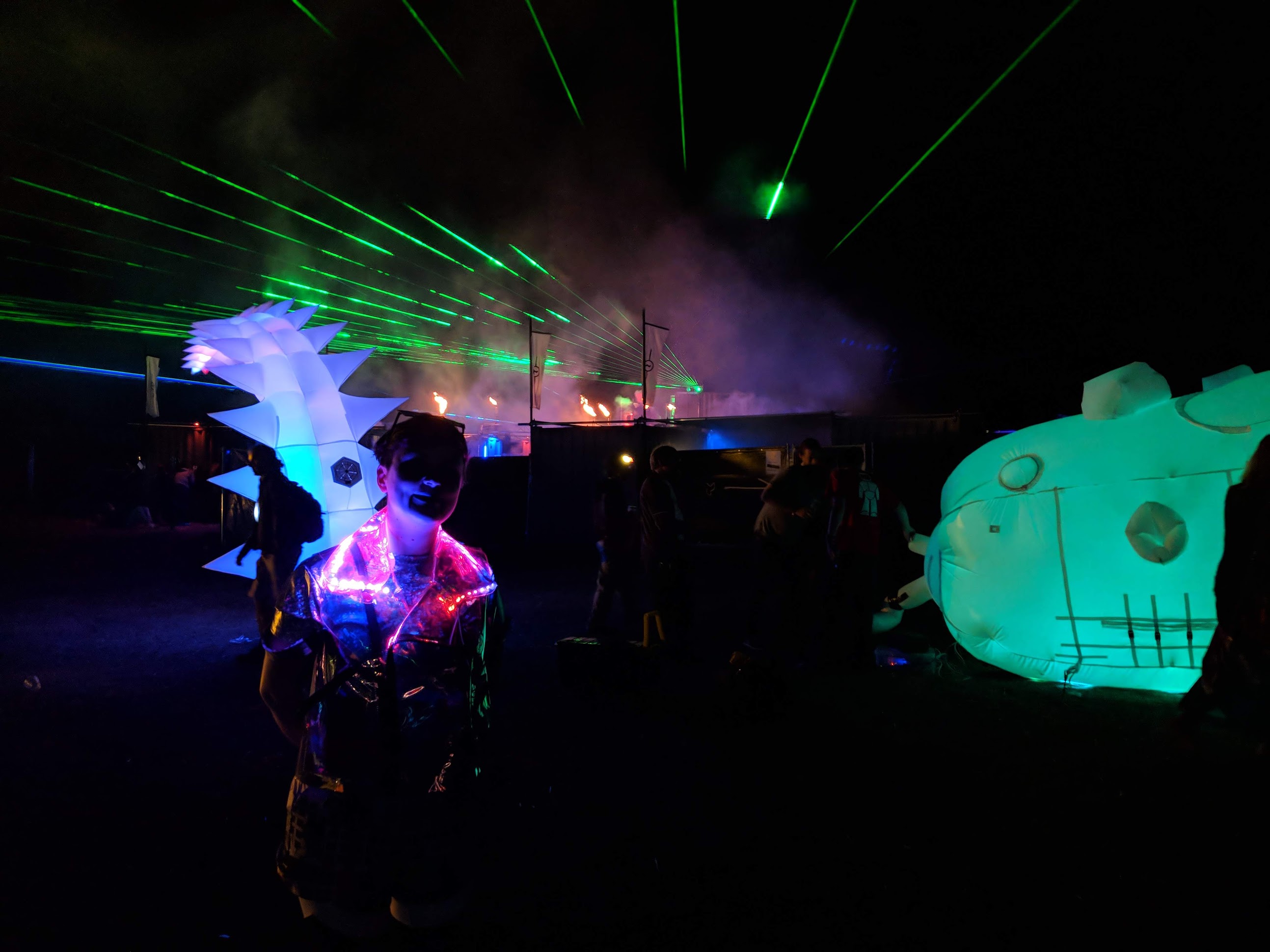